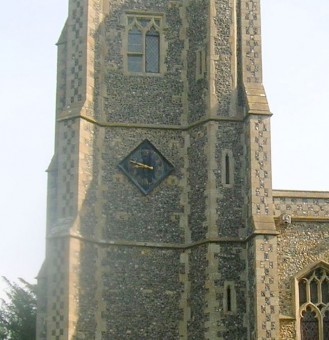 The church of St George at Stowlangtoft has a tower clock, known as a ‘birdcage' type, dating back to the very early 1800s. The clock was driven by a heavy weight descending the tower under gravity: a cord, with one end anchored to the weight and the other end wound onto the clock mechanism drive drum was pulled as the weight slowly dropped.

For the clock to keep going without stoppage, it was necessary for the weight to be re-wound back to the top of the tower before it reached its lower limit of travel. Accordingly over the last 200 years or so a person has had to climb the steep spiral tower staircase, twice a week, to undertake this onerous task.

The Need for Clock Automatic Winding

The church council, (PCC), was finding it more and more difficult to recruit and retain volunteers to regularly wind the clock and keep it going consistently.

In the modern world most people have watches, smart phones etc., and do not have to rely on public clocks for checking the time as perhaps was quite usual in the past. However a church turret clock that is consistently working and accurate, is noticed and appreciated and provides a positive contribution to the tower that houses it. Conversely a public clock that is often showing the wrong time or is stopped can have a negative impact that sets an overall impression of not caring and decay.

Installation of a Clock Auto-winder Agreed

In 2011, after due consideration, the PCC decided that installing an automatic electric winder would offer the best long-term solution to resolve the problem and accordingly set this out as a proposal.

The cost of the clock enhancement works was assessed. Careful research of the, somewhat niche, market for automatic clock winders available for retro-fitting to large public clocks had revealed a compact system, (refer to footnote 1), that provided ideal prospects of success for the project. Moreover the supplier and designer was prepared to offer a kit form of the component parts with detailed user-friendly instructions for fitting and setting up by persons possessing basic engineering skills.

Accordingly, it was proposed that two members of the PCC, appropriately qualified, and who had volunteered to undertake the task, would do all the necessary preparations and work at site. This significantly reduced the overall cost of the proposed clock improvements and assisted in making the scheme more financially viable.

The decision to go ahead with the project, subject to obtaining the necessary funding, was subsequently approved by the PCC. By the middle of 2011 the funding total amount, chiefly obtained by donation in which was included a generous sum donated by the Stowlangtoft Parish Council, reached the target amount and the clock modification work commenced.

The gravity weight system, formerly powering the clock, was disconnected and the new auto-winder drive output coupler fitted over the squared end of the clock manual winding spigot. The power supply for the auto-winder is derived from a compact 12 volt power pack with its batteries permanently on trickle charge from the mains. The advantage of this source of electric power, apart from providing a safe low voltage to external equipment, is that the battery support ensures continuous running in the event of power cuts.

One of the side issues resulting from changing from manual winding to automatic is that only infrequent visits to the clock room would then be necessary. The timekeeping of many of these historic clocks is often not very accurate but this normally poses no problem as the time, if wrongly displayed, would be conveniently adjusted and set right at the routine visits previously required for rewinding. However, with the introduction of automatic winding the, perhaps, one or so minutes weekly variation, against true time, would rapidly become unacceptably high. Fortunately the company supplying the auto-winder had designed an ingenious electronic device to resolve this problem by keeping the timekeeping consistently precise: Basically this is achieved by comparing the position of the church clock minute hand every time it reaches the top of the hour position, to that of the hour time reference sourced from the atomic clock. This is a dedicated time radio signal, generated by the atomic clock and broadcast 24 hours a day, by the National Physical Laboratory. A micro-processor analyses any variation in time between the ‘top of the hour' minute position and referenced against that of the received radio hour signal. Accordingly, if the church clock timekeeping is at variance with the true time radio signal, proportional correcting action is activated by the processor. This is physically achieved by controlling the flux of a small electro-magnet influencing a permanent magnet strapped to the clock pendulum: Depending on whether the clock is fast or slow, to correct the timekeeping, the electro-magnet applies magnetic pulses to effectively increase or decrease the arc of the pendulum swing.

The faculty from the Church Authorities approving the improvement modifications insists that the ancient clock must be sympathetically treated with all of its original features preserved. The document states that the clock must remain completely intact: it also must be easily possible to restore the clock to its original state by removing any added parts without leaving any signs of the amendments.

The clever design of the auto-winder and electronic regulator fully complied with this edict as purpose made clamps allowed easy attachment: there was no need to drill, remove or adapt any parts of the original historic clock mechanism including its framework. The mechanical drive interconnection acted on the original drum drive in such a manner that, if desired, disconnection, and reattachment of the former weight drive system, could be achieved within minutes to revert to the original hand winding.

The objective to eliminate the need to manually rewind the clock every few days was achieved together with the added advantage of an accuracy of timekeeping which is now precise and consistently maintained.

It is considered that the clock enhancement scheme outlined above reflects a splendid example of uniting the advantages of the best of contemporary technology with the impressive and splendid workmanship of the past.

[2] The clock mechanism is not generally on open view but can be viewed by special arrangement.

[3] A video showing the church of St George, and including footage of the clock mechanism, new auto-winder and regulator equipment, can be accessed by pressing Ctrl + clicking on this internet link: http://youtu.be/gAum5Ls-17E